In June this year we held the third annual PyCon in the Czech Republic, for the first time held in Prague. We’d like to take this opportunity to wrap up the 2017 conference so we can kick things off for 2018!

All the people who organized the PyCon CZ event are volunteers and worked on it in their free time. Big shout out to all the core team members as well as all other people who helped with preparation up front or on site. Big thanks to all the CfP submission authors, the invited and accepted speakers, all the attendees who joined us to make PyCon CZ the amazing event it was, the sponsors, and our hosts at both MeetFactory and the Faculty of Information Technology CTU in Prague. Two special thanks also go to:

To acknowledge the heroic achievements of the PyCon CZ founder Tomáš Ehrlich and to give him some time off after two restless years organizing the conference, we agreed on moving the event to Prague. Bára Drbohlavová volunteered to become the chair of the conference and a new organizing team started to form.

Today, we can say that the hand-over was successful and the Prague team is very well capable of organizing PyCon CZ events! Even though the team was forced by bad luck to change the date and venue at the last minute, at the end there was an amazing atmosphere and a cheerful feedback.

We did not manage to have dedicated mobile apps for the event as last year. On the other hand, we had a UX-aware DTP-capable frontend designer as part of the core team, which resulted in many improvements in the presentation of the conference, especially the usability of the website on mobile devices.

We carried out a feedback survey during and after the event. We’ve got 39 responses in total.

This was the first time we managed to have a live stream from the event. The stream covered both days of the conference talks and both rooms. Thanks to the fact that the Q&A was running on Slido, not only people in the rooms, but also anyone watching the stream could ask questions. The stream recordings are still available on YouTube:

Special thanks go to Peter Hozák who voluntarily posted a comment with time anchors under each of the videos, so soon after the conference anyone could easily scan the recordings to watch what they like.

Post-processed videos of individual talks are available on YouTube as well. Each talk page was updated with the video embedded right under the talk description.

An official selection of photos from the event is available on Google Photos.

The videos of talks were uploaded by the end of August. The numbers below were collected on 1 Oct 2017, that means after one month from publishing.

Catering (except of coffee, which was prepared by Kofárna) was provided by coffee shop & bakery Slunce, which employs people with disabilities. The activities of Slunce are formally backed by the Sun for Everyone Endowment Fund (Czech).

We’ve put effort into making the conference as welcoming as possible. We had a Code of Conduct in place and we were reaching out to specific communities which are usually underrepresented in technical conferences.

The women/men ratio of the organizing team was roughly 50:50. After moving the conference from Brno to Prague, the Prague PyLadies course graduate Bára Drbohlavová volunteered to become the chair of the conference. The PyLadies of Prague, Brno and Ostrava were invited to attend with a discount equal to the student/teacher ticket fare.

Vojtěch Polášek, author of the Blind attendee about PyCon CZ 2016 blog post, came to the conference again this year. His own report follows:

After I had attended PyCon CZ last year, I decided to repeat it as soon as possible. And therefore I arrived in Prague in June to see what's new with Python and to meet old and new friends. Unfortunately, I was able to attend only on Friday so I missed the workshops.

This year, I didn't manage to find anyone to assist me throughout the conference so I decided to go alone. But time showed that I wouldn't be alone at all. There was literally almost not a single minute when I would feel abandoned at this place. There was always someone around to help me or to talk to me. Whenever I am surrounded by such people, it leaves a long lasting positive feeling in me and PyCon CZ 2017 wasn't an exception.

Talks were very interesting and mostly accessible. I guess that speakers probably read my short post from previous PyCon CZ, where I suggested some improvements concerning the accessibility of talks. Also this year PyCon CZ was hosted in a somewhat smaller building. I understand that it could be a bit unconfortable but on the other hand after several hours I was able to navigate through the building almost without asistance.

During the conference I decided to give a lightning talk at the end, where I demonstrated very shortly how I can use the computer. I did that because the Linux screenreader Orca is written in Python. Thank you for giving me such opportunity to show that and I hope that it could attract someone who would like to focus their Python skills in this way. Finally, I would like to thank Red Hat for providing me with a free ticket. My thanks also go to Chris Ward who tried to help me as much as possible throughout the whole conference.

I am looking forward to visiting PyCon CZ next year as well and to finally attend some workshops.

The selection process for talks and workshops did not take gender into consideration.

From the detailed analysis of the data we have it seems that women tend to buy cheaper tickets than men, probably mostly because in the context of the Czech Python community they’re often beginners as well, without technology being their full-time day job. The data shows that the ticket price is important for achieving inclusivity. Without the discounts aimed towards women (Django Girls, PyLadies) and without the Financial Aid we would see much fewer women attending the conference.

In the past years, the Czech Python community has made a big leap towards attracting both women and beginners into tech. We think the attendance of women and beginners at PyCon CZ is significantly influenced by the day-to-day work of all who put in the effort, primarily everyone around the activites of PyLadies. We hope to become an inspiration for other Czech tech communities and events.

What Could Have Been Done#

The organization team agrees that all PyCon events should be accessible and welcoming to everyone, regardless of their background. We agree that a clear and specific Code of Conduct is a necessity for any event.

What Could Have Been Done#

In the spirit of open source and transparency, we’re happy to share a summary of our budget (all numbers are thousands of Czech Koruna, CZK).

We ended with a positive balance of close to 297 500 CZK. That’s because the conference moved from Brno to Prague and the organization team also changed, so we were very defensive about our estimates and spending. All the surplus funds will be available at Pyvec’s transparent account as support funds to any Python-related activities in the country, and the rest is going to be applied to the next year’s event budget.

In the past, Pyvec had only limited funds to reimburse community expenses such as stickers, community sprints, workshop/meetup equipment, open source educational materials, and more. Thanks to PyCon CZ 2017 surplus funds, the support budget is now much larger, which can be a significant help to the development of the Czech community.

Should funding prevent you from organizing a Python-related event, or should you miss any equipment needed to promote Python, please let us know at info@pyvec.org. The funds are a great opportunity for the Czech community to thrive – which means not only more beginners, but also a healthier job market.

Now, on planning PyCon CZ 2018. For the next year, the conference stays in Prague. Neither the approximate date should change, so count with early summer. You can join the organizing team, or just keep track of our progress via our different channels:

Send an email to info@pycon.cz if you’d like to request an invite to join our PyCon CZ planning channel on Slack (it can also be used through IRC). 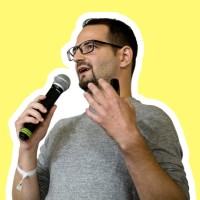 Honza is a software engineer. Since 2011, he has been helping to develop the Czech Python user group. He works at Apiary as a maintainer of Dredd, an open source tool for testing web APIs.